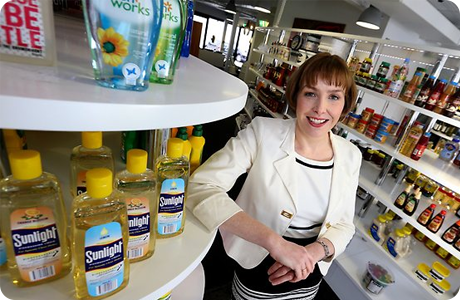 From the street, the office of Inpact Innovation, with its brightly lit aisles stocked with packaged grocery items, appears just like any other Melbourne supermarket or corner store.

But look a little closer and it becomes apparent that many of the products have yet to find their way on to Australian shelves.

Take the 100 per cent light-proof bottle, designed by the company in conjunction with dairy giant Fonterra to better preserve the taste of milk, and which has helped lift sales of milk in New Zealand by 2.5 per cent since being launched in April.

Or the award-winning Infini bottle, with its ergonomically designed handle making it easier to get it in and out of the fridge, which also claims to have the lowest carbon footprint of all milk bottles.

Then there’s the new plastic “tin” of paint, created following consultation with professional painters, decorators and hardware stores to prevent paint congealing under the lid. It is also significantly lighter than most tins on the market, making it easier to pour paint from, while the wider, moulded handles ensure that it’s more comfortable for customers to carry.

Inpact Innovation is a division of the fast-growing Pact Group, the old Visy Packaging business now owned and run by Raphael “Ruffy” Geminder, son-in-law of packaging magnate Richard Pratt, which is speculated to be gearing up for a public float.

Opened just three years ago, Inpact is fast becoming a critical cog in the broader business, which turns over more than $1 billion a year supplying bottles, PET containers and other packaging items throughout Australia, New Zealand and Asia.

Pact Group’s general manager of sales, marketing and innovation, Siobhan McCrory, believes food companies are finding it tougher to make their products stand out on supermarket shelves, particularly when price has become a significant driver of customer decisions.

Having been lured from retail giant Coles, where she headed product selection for its supermarket renewal program, McCrory also understands just how hard it can be to change customer behaviour.

“Our customers are increasingly asking, ‘How do we differentiate through packaging?’ ” she says.

“Having worked in retail . . . it was apparent to me that packaging was going to play a key role in driving innovation through various categories.”

McCrory and her team work closely with Pact Group subsidiaries and their customers, which include leading food and beverage companies such as Fonterra, Lion, SPC, Kraft, Heinz and Mars, to devise better packaging solutions.

The company sources the latest technologies worldwide, which are licensed and adapted for the local market, but also has the in-house capability to develop its own proprietary technology.

Bespoke assignments, developed with a specific client in mind, now comprise about 50 per cent of Inpact’s work. “It’s gone from being an arm of the business to now being referred to as the innovation heart,” McCrory says of the centre.

“We’re the only packaging company that goes from insight — the initial idea — all the way through to commercialisation, and takes on the accountability as well.”

Innovation, originally relating to sustainable packaging solutions, has long been a central tenet of the packaging business, providing it with an edge over its competitors.

However, as the push for sustainability gradually entered the mainstream, it became apparent that the company would need to broaden its approach to innovation to continue to differentiate itself.

Geminder, who declines to be drawn on the float speculation, admits that when the centre was established in 2010 some people thought it was merely a “corporate extravagance”.

He says most businesses understand the importance of innovation, but applying it in practice can prove challenging.

“We all talk about innovation, but in reality I don’t believe people are embracing innovation the way they should.”

According to Geminder, one of the challenges that Pact Group had when dealing with its own customers was the fact they were often from completely different backgrounds and therefore would come to discussions with differing viewpoints.

“Deep-diving” into a market or product segment is one strategy that the company deploys as it endeavours to understand precisely how a product is used throughout the supply chain — from being loaded on the truck en route to the store to inside the end-customer’s home. McCrory points to a recent and ongoing project into cheese packaging, which revealed that many consumers had issues keeping cheese fresh once the original packaging was opened. In-home interviews turned up examples of people using clothing pegs to re-seal packets, while teenage boys who failed to properly wrap the cheese after use was a frequent complaint.

“It’s one of the areas where we are looking at bringing new technology,” McCrory says.

“And the whole fresh food area for us is another key focus; looking at how we can help supermarkets support their growth in the category, including ready-made meals, salads and value-added produce.”